Submitted By:
Réka Deák
About the Film:

Lady Amplitude and Marquise Interference both claim that a baby is theirs. Quing Solomon, the result of a playful collaboration between two puppeteers, two fine artists and a quantum physicist, translates the story of Solomon's judgement into the quantum world.

The problem with quantum measurement is one of the inspirations behind this short. Watch this video for a more in depth explanation of the topic: https://www.youtube.com/watch?v=Be3HlA_9968

The team behind Quing Solomon recorded a video interview for Quantum Shorts. You can watch their interview here. Below is an edited transcript of the interview.

Please tell us about yourselves.

What was the quantum inspiration behind the movie?

AG: The story was inspired by the analogy of Solomon’s decision and the problems of measurement and the role of observation in quantum mechanics.

RD: We met at a BBQ – actually at many BBQs. Aurél came up with the idea to make a short movie about quantum physics – since he is a real quantum physicist. We started to play around with the ideas; there were many ping-pong (with the ideas). In two days we shot, we cut, we edited and we did it!

DM: I am very surprised and delighted that we have been chosen to be part of the ten films which are going to screen at your festival. It was an absolute pleasure to work with all the guys.

FS: We had a lovely time working with my friends on this little video and I was so pleased that it was chosen in the last ten to be shown at the festival. I hope everyone enjoys watching it as much as we did making it.

HA: I am interested in how people will react to the mixing of quantum physics with classical puppetry.

Réka Deák is a puppeteer from the Czech Republic. 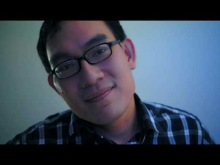