Submitted By:
Lin Tianyun and Chen Peishan
About the Film:

Witness a tense battle between a detective and a psychopath in Heads or Tails. Is the girl dead or alive? This film by Singaporean Director Tianyun Lin and screenwriter Peishan Chen explores the Schrodinger’s cat paradox through the cinematic lens of a criminal investigation. Health warning: the possibility of a cat existing in a quantum superposition of dead and alive states exists only as a thought experiment.

To learn more about Schrodinger’s cat, try this short cartoon from MinutePhysics: https://youtu.be/IOYyCHGWJq4

My team is a group of students from the Singapore Media Academy’s scriptwriting and acting classes. We started making short films a few months ago out of our interest to write and produce our own work. We have since produceda four short films that we have submitted to various competitions and festivals.

The idea for the film came from trying to transplant the Shrodinger’s cat thought experiment into an alternative setting. We eventually chose to use the situation of a kidnapper to reflect this.

Quantum physics is an interesting and complex way of looking at the natural world. We hope that we have presented the thought experiment in an alternative, easily understandable way for the audience.

What’s an interesting detail about you how made the movie?

It was a challenge finding suitable venues to film the movie so we actually had to use the same room to simulate the interrogation scene as well as the kidnap scene! Lots of set-dressing involved!

This is the first time a film of ours has qualified for the finals so we are absolutely thrilled! We do hope that this will be a good start for our dreams of becoming good filmmakers.

Lin Tianyun is the director and Chen Peishan the screenwriter of this film shot in Singapore.

Cat in the Box 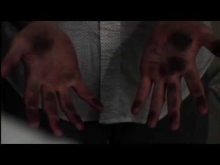