Submitted By:
Chris Willoughby
About the Film:

“You can’t just use the strangeness of quantum physics to justify any absurdity,” says a strange creature in Gluon Free. This animation was created by Chris Willoughby, a filmmaker in Australia, to explore the idea of parallel worlds. It features a meta appearance of a parallel Quantum Shorts festival. Chris returns to the festival having won the very first Quantum Shorts competition in 2012 with an animation called Quantum Daughter.

Here’s a good place to start reading up on the history of the many worlds interpretation in quantum physics: https://blogs.scientificamerican.com/observations/the-difficult-birth-of...

I'm happy trying to develop animated films, videogames, animatronics and music. Whilst I like working with others, there was no time to get a team together for this project, so I made the film alone.

I realized I needed an idea and thought this one up over two separate mornings. It was the placeholder whilst I was trying to think up the real idea, but then I thought why not use the idea I already have?

What is the quantum inspiration?

The inspiration is partly from reading an interview with physicist Kip Thorne, where he said that parallel universes, as fun and cool as they are to imagine, aren't as yet proven to exist. One of the things I like about quantum physics is that it looks closely at reality. It may have bizarre phenomena, for example nonlocality and entanglement, but it is still looking closely at reality, so I feel it offers truth.

What’s an interesting detail about you how made the movie?

A piece of glass I wanted to use in the movie arrived in the post on the exact day I wanted to film it.

It may not be hard sci-fi but I still think Forbidden Planet (1956) is a great moment in sci-fi, with it's all electronic music score. The first time ever for a film. And the beautiful matte paintings of the Krell's underground machine complex that still hold up today.

It's a great honor. It's a real boost of pleasure that someone liked my stuff.  I hope the audience find the film worth their time and that they enjoy it.

Is there anything else you would like to tell us?

I've never owned a rubber duck before making this film.

Chris Willoughby is a filmmaker in Australia.

Man In A Box 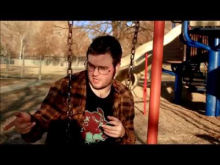