We are all on the same bus

Submitted By:
Nuno Serrão
About the Film:

We are all on the same bus but some of us are more awake than others, says Portuguese filmmaker Nuno Serrão. In his short film, featuring music by Lonnie Holley, dancing on a bus makes a metaphor for the arrow of time and the concept of the observer in quantum physics.

The curious might read this article for a flavour of how physicists are studying the arrow of time: https://www.technologyreview.com/2017/12/22/241505/physicists-demonstrate-how-to-reverse-of-the-arrow-of-time/

Please tell us about yourself and the team that made the film.

This was shot using a skeleton crew of two and excellent talent, like the dancer Luis Daio. I am a Portuguese photographer and filmmaker born on Madeira Island. My blank slate starts with a functional level of emotion, logic, minimalism, and curiosity. I consider these to be the metric system to my creative process.

Curiosity often leads me into documenting frameable micro-narratives that, in the end, will pose a whole new set of questions. With the sum of all relatable questions, I think I will get an answer.

I have wanted to work with dance for a long time, ever since I read The Creative Habit by dance choreographer Twilla Tharp, and science has always been a part of my life. Adding those two together and a bus as a scenario meant that I had Arthur Eddington’s ‘arrow of time’.

What is the quantum inspiration? What makes you interested in quantum physics?

I have found that only two things can stretch my imagination like no other, and they are art and science. For my work in photography or film, I usually bind them together with philosophy. And, how can one not be interested in quantum physics? I mean, quantum entanglement, retrocausality, the fact that the Universe is bound to an observer…. The arrow of time (bus) and the awake observer role (dancer) are the more obvious links to physics.

Please share with us an interesting detail about you how made the movie.

We drove the bus in and out of the same tunnel for one hour to make all the shots.

Intrigued. I hope that they are left thinking about society.

Hands down 2001: A Space Odyssey, but Under The Skin is up there too.

It means a lot. This is coming from a kid that looked at the stars since he was five. My elder brother and I would go to the roof of our house and stare at the stars for hours.

Nuno Serrão is a filmmaker from Portugal.

Man In A Box 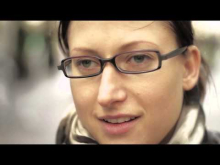 Quantum objects can exist in two or more states at once: an electron in superposition, for example, can simultaneously move clockwise and anticlockwise around a ring-shaped conductor.

The arrow of time is “irreversible”—time goes forward. This doesn’t seem to follow the laws of physics which work the same going forward or backward in time. Some physicists argue that there is a more fundamental quantum source for the arrow of time.

The rules of the quantum world mean that we can process information much faster than is possible using the computers we use now.